From the 1st of July 2014 the VBI Group decided to move the production of minibuses to Denmark, on our address in Kliplev Erhvervspark 1, DK-6200 Aabenraa.

This decision was made, because the production has become much more streamlined and therefore there is no longer enough gained, by producing minibuses abroad. At the same time, we have developed floors, seat-legs and other components in association with VBI Components, which will be situated on the same address. We expect synergy to be gained by having both productions under one roof.

The majority of the employees that are assigned with the production part, all have more than 10 years of experience with conversions of minibuses.

With 6 employees we have the capacity to convert 20 minibuses a month, without any compromise to the quality. This was achieved with a great effort by streamlining the production, to be as effective as possible. 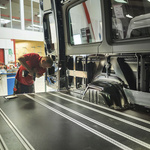